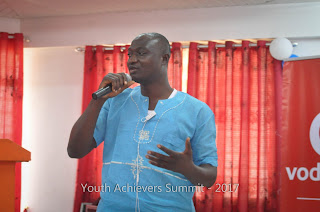 The fast rising star of Northern Ghana, Prince Siita Sofo  Hissan of NTV fame is amongst the few personalities to have been nominated for Media Category in the maiden edition of  40under40 Awards slated to take place on Friday 29th September,2017 at the plush Kempiski Gold Coast Hotel in Accra, Ghana. His television station that has now become a household name in Ghana has also been nominated as the media station in Northern Sector for MOBEK Awards 2017 which is also marked to happen at Akayet Hotel in Bolgatanga on 21st August 2017.
BACKGROUND
Prince Siita Sofo Hissan popularly called “The Investor” is a ‘Media Mogul’ who owns and serve as Chief Executive Officer (CEO) of North Television Ltd (NTV) and Brong Ahafo Television (BATV).  Aside building businesses and creating jobs across board, he is a full time worker of Ecobank Ghana with banking as his professional career. Prince Siita as well is the chief consultant for his career development firm called The Investor Consult (TIC) which is based in Tamale with consulting services across many all parts of Ghana.

Prince Siita Sofo currently serves as a mentor to most youth in the three (3) regions of the North and is revered as an Icon for Business and Development. Despite his watertight schedules, Prince Siita still invest a great deal of time in speaking to the youth, he has delivered inspiring presentations to various youth groups in and around Northern Ghana on several occasions.
He is also the author of two best selling books. “Set Your Goals and Reach The Top” was his first book, with his second being “Those Who Want To Be Rich” which was forwarded by Mr.Prince Kofi Amoabeng (President of UT Holdings) and endorsed by Professor Saah Dittoh (University of Development Studies-UDS), Professor Abdulai Asuro (Vice Chancellor, Tamale Technical University), Professor Koblah Aheto, David Dontoh (Actor) among other dignitaries. Those who want to be Rich, is regarded an essentially book for individuals seeking for financial liberation.His TV Station, North Television is currently the most watched TV in Northern Ghana. Northern Television is projected and predicted to be the vehicle to drive home unity, peace and development in the Northern Ghana and the entire country as a whole. Prince Siita  Hissan also offers consultancy services to other TV stations in Ghana and has successfully hosted the likes of Cine Plus Television channel  as well.
Siita Hissan is also the founder of Northern Investor Awards (NIA), a council member of Ghana Young Entrepreneurs (GYE), and a member of Northern Ghana Association of Entrepreneurs (NORGAE).
EDUCATION
After successfully completing T.I Ahmadiyha Senior High School in Kumasi, Prince Siita, proceeded to attain  a Higher National Diploma (HND) in Marketing from Sunyani Polytechnic and a degree in Management from University of Cape Coast. He also holds an MBA in Marketing Management and a diploma in Management from Paris Graduate School of Management.
AWARDS
Spearheading various developmental projects in Northern Ghana, Prince Siita has received several awards for himself and his television station. Prince Siita is the youngest to receive the prestigious “Star of the Northern Zone Award” under the auspices of National Youth Authority, An enviable award he picked alongside the 2nd deputy speaker of parliament Hon. Alban Bagbin, Minority Leader of Parliament and former minister, Hon. Haruna Iddrisu, among other influential Ghanaians in 2016.
Siita Hissan has also won several awards for his TV station within two years of existence including Northern Music Awards (Best TV promoting Northern Music 2016), Ghana Tourism Awards (Best TV promoting Northern Culture), and Northern Entertainment Awards (Best TV promoting Northern Music 2017) among others.
Being a rising star of the North and an ambassador of Northern Development, Prince Siita Hissan believes the youth have no reasoning in failing. He holds a firm belief that, the future of Ghana will certainly be built under the anchor of the youth with Northern Ghana penciled as a potential area worth investing. Speaking to reporters of commentsafrica  The Investor is optimistic annexing the various awards will further help him get the needed exposure to bring in investors to help develop businesses and Northern Ghana as a whole.

You may have missed